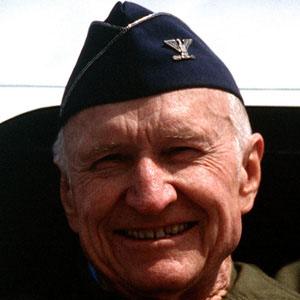 Most famous as the first "Candy Bomber" or "Raisin Bomber" to airlift supplies to West Berlin, Germany during the 1948 to 1949 Soviet blockade of the city, this United States Air Force Pilot also became known for his missionary work on behalf of The Church of Jesus Christ of Latter-day Saints.

Before joining the United States Army Air Corps at the start of World War II, he was a pilot with the U.S. Civil Air Patrol. He later earned an advanced degree in Aeronautical Engineering.

As a result of his involvement in the West Berlin Airlift operation, he was given a number of nicknames, including the "Chocolate Flyer" and "Uncle Wiggly Wings."

He was raised in a Mormon household in Salt Lake City, Utah. His first marriage, to Alta Jolley, resulted in five children; his second marriage (following Jolley's 1999 death) was to his high school girlfriend, Lorraine Pace.

United States Army officer Lucius Clay was the primary architect of the Berlin Airlift operation in which Halvorsen participated.

Gail Halvorsen Is A Member Of