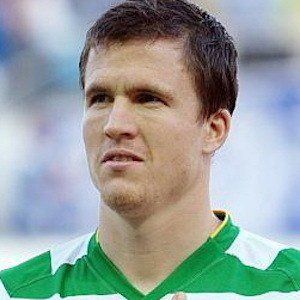 Former professional soccer player and coach who first rose to fame playing with Newcastle United. He later made a name for himself during stints with the Celtic football club and Wigan Atheltic. After his retirement in 2015, he began coaching for Wigan Athletic.

He began his soccer career playing with the Celtic Boys Club before moving with his brother to Newcastle United.

He made his international debut in 2002 with Scotland and later became a member of the Scotland national football team roll of honour.

He and his older brother Stephen played soccer together on the Newcastle United football club.

He was managed by Malky Mackay with Wigan Athletic football club before he replaced him in 2015.

Gary Caldwell Is A Member Of