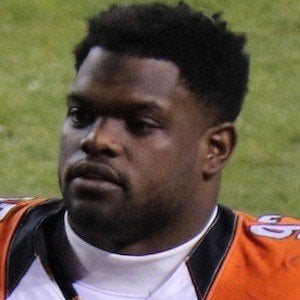 American football defensive tackle who was a fourth round selection of the Cincinnati Bengals in the 2010 NFL Draft. He made four Pro Bowls in his first five seasons with the team.

He attended the University of Georgia, where he was a first-team All-SEC selection in 2007 after recording 15 tackles for loss.

He was a talented track & field competitor in high school, excelling at discus and shot put.

He was born to Gene and Sandra Atkins. His father played safety for the New Orleans Saints and Miami Dolphins.

He and Carlos Dunlap were both 2010 draft picks of the Bengals and combined for more than 90 sacks in their first five years together.

Geno Atkins Is A Member Of