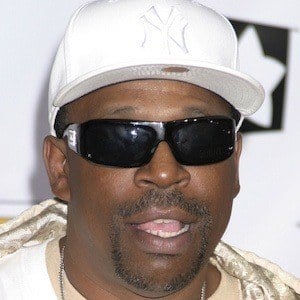 Curtis Fisher, otherwise known as Grandmaster Caz, is a legendary rapper and DJ who helped form the art of rap in its infancy in the 1970s. A standing member of The Cold Crush Brothers, he has also worked as a celebrity tour guide for the Hush Hip Hop Tours in New York City.

His first encounter with rap music occurred at a block party in 1974. Not long after, he became the first rapper to perform both as DJ and MC.

A prolific songwriter, he released the book Written! in 2015, a collection of his original lyrics.

He and his wife have two daughters, Zinetta and Bianca, and a grandson named Elijah.

In 2015, he was featured on the single "Downtown" alongside Macklemore and Ryan Lewis.

Grandmaster Caz Is A Member Of