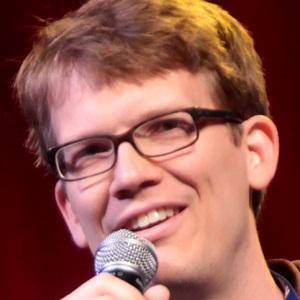 YouTube star who collaborates on the Vlogbrothers channel with his brother John Green. He and John co-created VidCon, the largest web video convention in the world. In January 2015, he received the opportunity to interview US President Barack Obama, alongside fellow YouTubers Bethany Mota and GloZell Green.

He graduated with a BS in biochemistry and a master's in environmental studies, and worked in web development for friends and neighbors.

In addition to his work in web video, he is also in a band, Hank Green and the Perfect Strangers. He and his brother have co-created many YouTube channels, including SciShow, CrashCourse, and Healthcare Triage. He has also posted a number of educational short videos for his 900,000 followers on his hankgreen Instagram account.

He grew up in Orlando, Florida and got married to his wife Katherine in 2006. Their first child, a son named Orin, was born in October 2016.

He is good friends with many other YouTubers, including Michael Aranda, Hannah Hart, and Emily Graslie.

Hank Green Is A Member Of