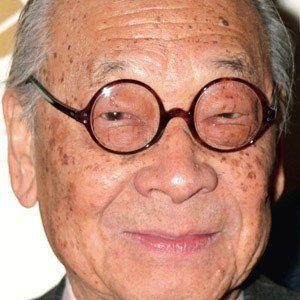 Chinese-American architect of sleek 20th century buildings. He was inspired by the gardens of Suzhou and was considered to be the Master of Modern Architecture. He was also controversial, especially after he designed a glass-and-steel pyramid for Paris' Musée du Louvre in the early 1980s.

He went to a school in Shanghai that allowed students only one-half of a day a month of free time. He studied architecture at the University of Pennsylvania, Massachusetts Institute of Technology, and the Harvard Graduate School of Design after relocating to the United States in 1935.

He founded I.M. Pei & Associates in 1955 after working for seven years under notable New York real estate magnate William Zeckendorf; his organization would become known as I.M. Pei & Partners in 1966, then Pei Cobb Freed & Partners in 1989.

He and Eileen Loo were married in 1939; she was his introduction to the GSD community. He fathered four children with her, including future architects Chien Chung Pei and Li Chung Pei.

He became friends with Walter Gropius and Marcel Breuer, both famed Bauhaus architects.