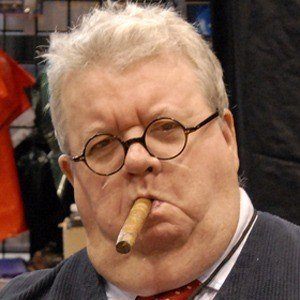 First gained fame playing Harcourt in the miniseries Edge of Darkness. He would go on to earn prominent roles in Ace Ventura: When Nature Calls, Around the World in 80 Days, and would play Bert Large in the long-running series Doc Martin.

He studied acting at Taunton School, the London Academy of Music and Dramatic Art, and the Salisbury Playhouse. His early career was spent in theatre with the Royal Shakespeare Company and in Nicholas Nickleby on Broadway.

He has had prominent roles in Doctor Who as Winston Churchill, he held a recurring spot in Rome, and has appeared in films like Oliver Twist and Hitchhiker's Guide to the Galaxy.

He has three children: Maisie, Angus, and Travers McNeice.

In his long tenure on Doc Martin, he starred opposite title actor Martin Clunes.