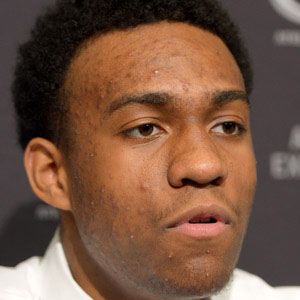 Forward who was selected second overall by the Milwaukee Bucks in 2014. He played one year of college basketball at Duke University, shattering numerous freshman records with the school before declaring for the NBA.

He starred at Chicago's Simeon High School for four years and was named Illinois' Mr. Basketball in 2012 and 2013.

During his junior year of high school, he was featured in Sports Illustrated and deemed the best high school basketball player since LeBron James.

He is the son of Sonny Parker, who was selected in the first round of the 1976 NBA Draft, and Folola Finau-Parker. He's the youngest of five children.

He was selected one pick behind Andrew Wiggins at the 2014 NBA Draft.

Jabari Parker Is A Member Of