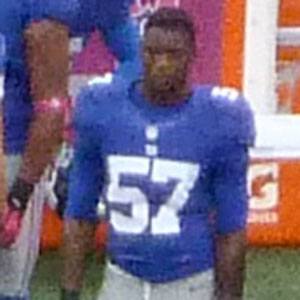 NFL linebacker who became a solid contributor for the New York Giants despite being a sixth round selection in 2011. He recorded 166 tackles and two sacks during his first 3 seasons.

He was a Second-team All-Big East after recording 71 tackles and 2.5 sacks as the defensive team captain for the University of South Florida in 2010.

He made a season-changing play his rookie year by forcing the fumble that led to the Giants' NFC Championship victory and eventual Super Bowl championship.

His mother's name is Theolanda Williams and he was raised in Tampa.

He stripped the ball from Kyle Williams to allow the Giants to score a game-winning field goal in the 2012 NFC Championship game.

Jacquian Williams Is A Member Of