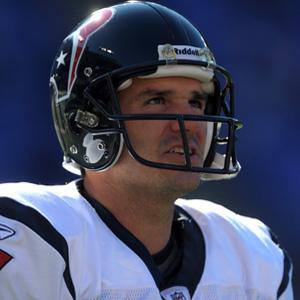 Former NFL quarterback best known for his time with the Carolina Panthers. He helped lead the Panthers to the Super Bowl in 2003 where they were defeated by the New England Patriots.

He comes from a horse racing background as his father was a jockey and his grandfather was a breeder.

He set the record for the longest completed pass in NFL Super Bowl history at 85 yards.

He has two daughters, Lauren Elizabeth and Lindsey Marie with his childhood sweetheart, Keri Melancon.

He and wide receiver Steve Smith provided the bulk of the offensive production for the Panthers during their 2003 playoff run.

Jake Delhomme Is A Member Of