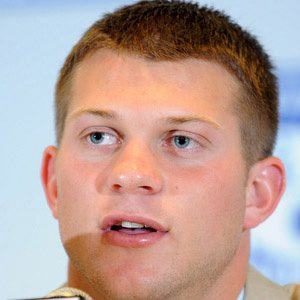 Washington University standout who became an NFL quarterback for the Tennessee Titans after being selected eighth overall in the 2011 NFL Draft. A number of injuries limited his time on the field as a pro and he was forced into an early retirement in 2015.

He was the Freshman of the Year in the Pac-10, and instantly became one of the top NFL prospects in the entire NCAA.

If he had entered the NFL Draft a year earlier in 2010, many believed he probably would have been the #1 pick, instead of #8.

He married Lauren Greer in 2011 and he has a son named Cooper and a daughter named Colbie. He was born into a football family. His father played college football at Western Washington University.

He became teammates with running back Chris Johnson on the Titans in 2011.

Jake Locker Is A Member Of