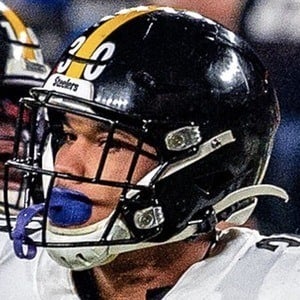 Running back who was selected in the third round of the 2017 NFL Draft by the Pittsburgh Steelers. He was projected as the fifth or sixth round pick by the NFL draft scouts.

He received MVP honors at the 2013 Little Caesars Pizza Bowl as a freshman, after rushing for 229 yards and a touchdown for the University of Pittsburgh.

He was named the 2014 ACC Player of the Year after rushing for 1,765 yards and 26 touchdowns his sophomore year of college.

He was born to Kelly Bibbs and Glen Conner and raised with four brothers. He was diagnosed with Hodgkin's Lymphoma in 2015.

Pat Narduzzi was his coach at Pittsburgh.

James Conner Is A Member Of