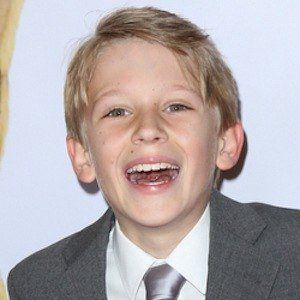 Known for his role as the titular character in the 2015 horror-thriller film The Boy. He starred alongside Rainn Wilson and David Morse.

His first professional acting credit came in 2013 in the children's film WonderGrove Kids: Game of Wonders. He went on to earn 2 more credits that same year.

In 2015, he made 2 appearances in the TV comedy Your Family or Mine as Dougie. In January 2016, he began his time on the soap opera The Young and the Restless as the recurring character Max Rayburn.

He was born and raised in Southern California. His brother, Devin, is also an actor.

In 2014, he appeared in the film Cooties alongside Elijah Wood and, once again, Rainn Wilson.

Jared Breeze Is A Member Of