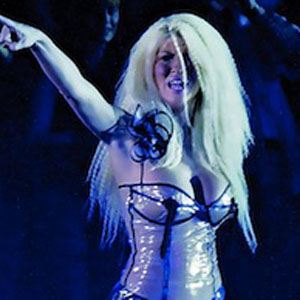 Serbian pop singer and columnist who became popular after releasing her debut turbo-folk album, Ogledalce, in 1995. She became a judge on the singing competition Zvezde Granda in 2015.

Her debut album sold upwards of 100,000 copies across Serbia and Montenegro, establishing her as a true pop star. She went on to have several chart hits, collaborating with Marina Tucaković much of the time.

She remixed the song "Dance Pe Chance" from the movie Rab Ne Bana Di Jodi and titled it "Insomnia." She released it on her website on December 30, 2009 and by the next day, it had been downloaded 1.5 million times.

She was married for two months to Bojan Karić. She then wed Serbian football player Dusko Tosic in 2008. She named her daughters Athena and Nika after the Greek goddesses of war and victory, Athena and Nike.

She used her newspaper column in Kurir to critique such politicians as Boris Tadic and Ivica Dacic.

Jelena Karleusa Is A Member Of