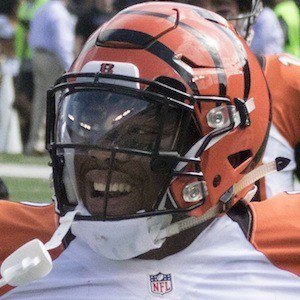 Running back who played for LSU and helped lead the Tigers to a 2014 Outback Bowl victory with a 216 yard and 2-touchdown performance. He was selected 55th overall in the 2014 NFL Draft by the Cincinnati Bengals.

He played his high school ball at Baton Rouge Redemptorist and earned the honor of a USA Today High School All-American.

He was involved in some off the field issues when he was charged with misdemeanor battery in 2013.

He was born to Cornell and Lisa Hill. He has two siblings, Cornell II and Amber.

He played under Les Miles for all three years he attended LSU.

Jeremy Hill Is A Member Of