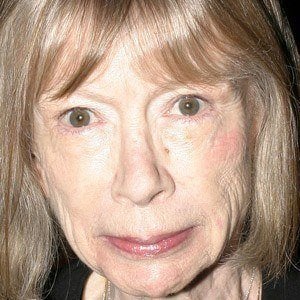 A renowned novelist, memoir writer, and literary journalist, she is best known for her sociologically-themed works that explore the unraveling of American culture and morality. Her best-known works include Slouching Towards Bethlehem (1968), Play It As It Lays (1970), Where I Was From (2003), and The Year of Magical Thinking (2005). She published over 25 books throughout her career.

She was raised in Sacramento, California and began writing at the age of five. She graduated from the University of California-Berkeley with a degree in English and subsequently worked as an associate feature editor at Vogue Magazine.

She contributed ideas and writing to the New Journalism movement and was a recipient of both the National Book Foundation's Medal for Distinguished Contribution to American Letters and the National Medal of Arts and Humanities. In 2021, she published her final nonfiction book titled Let Me Tell You What I Mean.

Her marriage to Times writer John Gregory Dunne lasted from 1964 until his death in 2003. She and Dunne adopted a daughter, Quintana Roo Dunne. Didion's 2005 memoir, The Year of Magical Thinking, details her experiences of losing both her husband and her thirty-nine-year-old daughter within a year's time.

She was encouraged greatly in her writing by her husband and fellow writer, John Gregory Dunne.

Joan Didion Is A Member Of