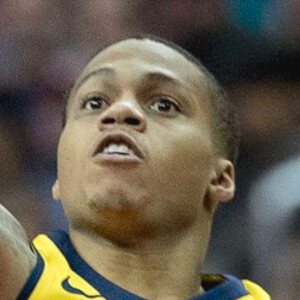 Point and shooting guard who rose to fame in 2015 after being named the Pac-12 College Player of the Year for the Oregon Ducks. He was a third-team All-American and selected in the 2nd round by the Indiana Pacers of the NBA Draft that year.

He was named Texas Mr. Basketball in 2010. He initially began his college basketball career at Houston.

He led the NBA D-League in scoring during its 2015 season playing for the Fort Wayne Mad Ants.

His father was formerly the Director of Basketball Operations for the University of Houston.

He has played for coach Frank Vogel during his tenure with the NBA's Indiana Pacers.

Joe Young Is A Member Of