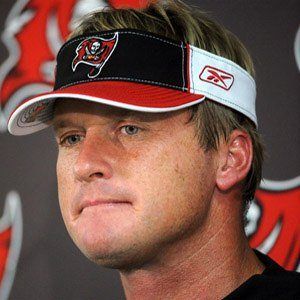 Former Tampa Bay Buccaneers head coach who led the team to a Super Bowl win in 2003, during his first year with the team. He had his first NFL head coaching job with the Oakland Raiders from 1998 to 2001, then became the coach of the franchise again in 2018 after spending several years as an ESPN NFL analyst.

He started coaching at the University of Tennessee immediately after graduating from college.

At 39, he was youngest head coach to win a Super Bowl ring at the time.

He married Cindy Brooks in 1991; together they had three sons.

He took the Tampa Bay coaching job after their first choice Bill Parcells backed out.

Jon Gruden Is A Member Of