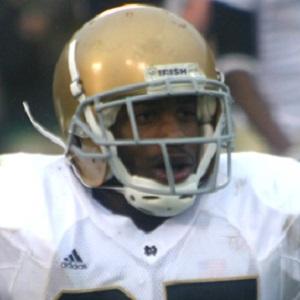 Running back who appeared on the cover of Sports Illustrated following his breakout 2014 game as a member of the New England Patriots. He signed with the Patriots after going undrafted out of University of Notre Dame, where he played from 2008 to 2011.

He made a Michigan state championship appearance while attending Detroit Country Day School.

In 2014, he became the first NFL running back since 1921 to score four touchdown in a game after coming into the game with zero career touchdowns.

His mother Jerri raised he and his brother as a single parent.

He formed a running back tandem with LaGarrette Blount in New England.

Jonas Gray Is A Member Of