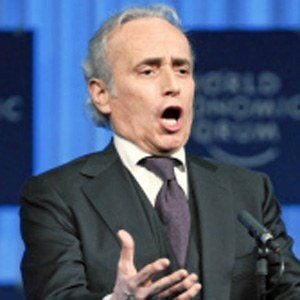 Tenor opera singer who performed as part of The Three Tenors with Luciano Pavarotti and Placido Domingo.

At age eight he gave his first performance, singing 'La Donna e Mobile' on national radio; by 1972 he had won the Giuseppe Verdi Competition and began touring internationally.

In 1987, at the height of his career, he announced he had leukemia and he set up his own foundation to help find treatments and cures for the disease, the José Carreras Leukaemia Foundation.

His group is widely imitated and referenced in pop culture: for example, one American sitcom had Nathan Lane portray a would-be Fourth Tenor.

José Carreras Is A Member Of