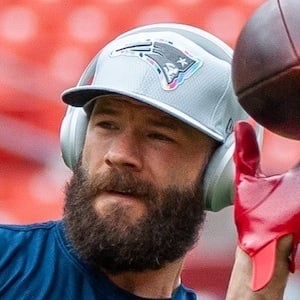 Wide receiver who made his NFL debut in 2009 for the New England Patriots and helped the team win Super Bowls XLIX, LI and LIII. He was named Super Bowl MVP of Super Bowl LIII after catching 10 passes for 141 yards.

He played one year of college football at College of San Mateo, and three years at Kent State University.

In college he was a quarterback, but after being selected in the 7th round of the 2009 NFL draft, he converted to wide receiver.

He was born in Redwood City, California. He had a daughter named Lily with Swedish model Ella Rose in 2016. He later dated supermodel Adriana Lima.

He became a favorite target of Tom Brady on the Patriots.

Julian Edelman Is A Member Of