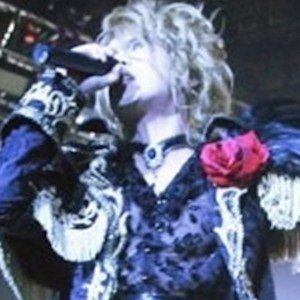 Rock singer of the visual lei genre who is known for being the lead singer of the bands Lareine and Versailles. Additionally, he has served as the head of two record labels: Applause Records and Sherow Artist Society. They were created in 2000 and 2006, respectively.

He gained his first experience in the music industry as a roadie for the visual lei rock band, Malice Mizer. He toured with them throughout the mid-1990's.

He was a member of Laleine from 1994 to 2007, when he and friends formed Versailles. In September 2012, Versailles released their eponymous 4th studio album.

He was raised in Hirotsuka, Japan. He comes from a family of musicians, with his mother and grandmother having both been piano players. His grandfather was also a violinist.

He formed the band Versailles in 2007 alongside Jasmine You.

Kamijo Is A Member Of