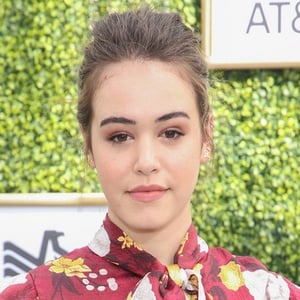 Actress who starred as the titular character in the 2014 indie thriller film Mary Loss of Soul. She rose to prominence following appearances as a teen actress on Disney Channel original series, including Kickin' It as Carrie/Tori. In 2018, she began starring on The CW's Legacies as Josie.

She began acting at the age of 8. She had previously been working as a model, and participated in Ralph Lauren print campaigns until she was 10 years old.

In 2016, she began appearing on the ABC Family series The Real O'Neals as the recurring character Lacey. She has also made appearances on Criminal Minds and American Horror Story.

She has one older brother named Kane. Her father's name is Garrett. She came out publicly as queer during Pride Month in 2021.

In 2016, she starred as the fictional daughter of Jason Lee and Alyssa Milano in the TV movie What Goes Around Comes Around.

Kaylee Bryant Is A Member Of