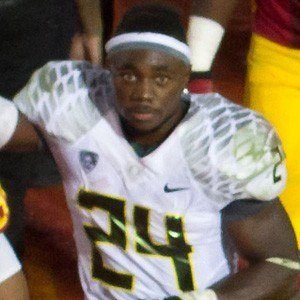 Speedy University of Oregon running back who was selected in the 6th round of the 2013 NFL Draft by the Carolina Panthers.

He was offered scholarships to Arizona State, UTEP and the University of Oregon after a dominant high school career.

He broke an Oregon school record in November, 2012 with 321 rushing yards against USC.

He was raised with five older brothers and an older sister.

He was in the running for the Heisman Trophy during the 2012 season, but the award would be won by quarterback Johnny Manziel.

Kenjon Barner Is A Member Of