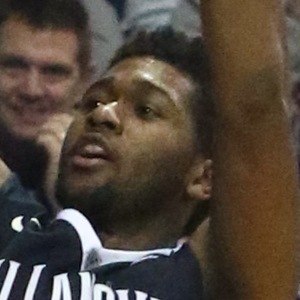 Basketball forward who became a part of Villanova lore when he hit the NCAA tournament-winning shot in 2016, leading the Wildcats to a 77-74 victory and their second national championship.

He joined Villanova in 2013 after a stellar career at Gonzaga College High School.

He did his part to help Villanova shoot better than 58% as a team in the NCAA tournament, going 33-58 from the field in six games.

He was born to Felicia and Kelvin Jenkins, but was later raised by Nate and Melody Britt. He grew up with Nate and Melody's son Nate Britt, who was on the UNC team that Jenkins beat with his buzzer-beating three-pointer.

His heroics were made possible by the tournament Most Outstanding Player Ryan Arcidiacono, who passed the ball to an open Jenkins just before time ran out in the national championship.

Kris Jenkins Is A Member Of