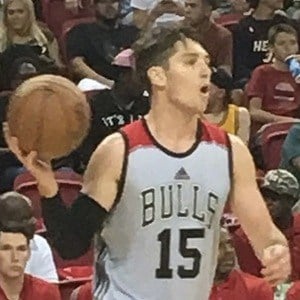 6'3" guard who signed with the San Antonio Spurs in 2016 NBA Draft. He was named the Most Outstanding Player at the 2016 NCAA Tournament after helping lead the Villanova Wildcats to a national title as a senior.

He played for the University of Villanova from 2012-2016; he amassed over 1,500 points over the course of his storied career at there.

He was selected to the Big East All-Rookie team in 2012. He also joined the 2013 FIBA Under-19 World Championship.

His parents, Joe and Patti Arcidiacono, both attended Villanova as well. He is one of six siblings.

When he was in 7th grade he met his future Villanova coach, Jay Wright, who predicted that he would attend the school.

Ryan Arcidiacono Is A Member Of