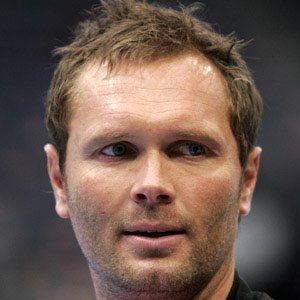 Former Danish handballer who won numerous titles as a member of club teams SG Flensburg-Handewitt, with whom he won three straight DHB-Cups from 2003 to 2005. He finished his handball career as the top goal-scorer for the Danish national team.

He played youth handball for Vidar Sonderborg for a decade and a half.

He won a gold medal at the 2008 European Men's Handball Championships, where he was the tournament's top scorer and was named to the All-Star team.

He has a son named Frederik with fellow handballer Christina Roslyng.

He and Kiril Lazarov are both famous European handballers.

Lars Christiansen Is A Member Of