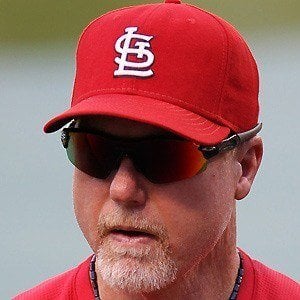 All-Star MLB first baseman who became the all-time single season home run leader after hitting 70 in 1998, but Barry Bonds topped him and hit 73 in 2001. He admitted to using performance-enhancing drugs after retirement.

He grew up with a brother who was a first round draft pick in the NFL.

He was a 12-time MLB All-Star and he won a World Series with the Oakland Athletics in 1989.

His brother Dan McGwire was formerly a quarterback for the Seattle Seahawks and Miami Dolphins. He has married twice, to Kathleen Hughes and Stephanie Slemer. He has four children.

In 1998, he and Sammy Sosa achieved national fame for their home run-hitting skills.

Mark McGwire Is A Member Of