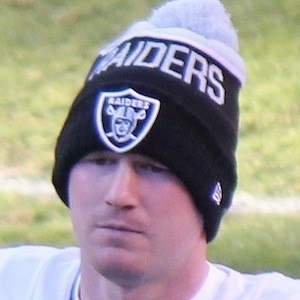 Quarterback who made his NFL debut in 2013 for the Oakland Raiders, starting multiple games as a rookie despite going undrafted in the 2013 NFL Draft.

He played college football at Penn State University, where he threw for 894 career yards and 46 touchdowns despite being a walk-on.

In his first NFL start, on November 17, 2013, he threw for three touchdowns and was named NFL Rookie of the Week.

He was born to Catherine and Paul McGloin.

As a rookie he shared playing time on the Raiders with another former Big Ten quarterback, Terrelle Pryor.

Matt McGloin Is A Member Of