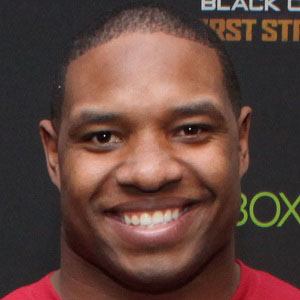 Running back who was the 2011 NFL rushing leader with the Jacksonville Jaguars. He was named to three Pro Bowl teams in his first six years in the league.

He played college football for the UCLA Bruins for 3 years, and he led the team in rushing in each of those 3 seasons.

He made his first playoff appearance in 2007 and he helped the Jaguars beat Pittsburgh in the Wild Card round but the next week they lost to New England.

He has three children, two son named Maurice II and Madden, and a daughter named Alaya. In 2012, he married Ashley Jones-Drew.

He tied a record which was set by the great Barry Sanders when he ran for two touchdowns of over 75 yards or more in one NFL football game.

Maurice Jones-Drew Is A Member Of