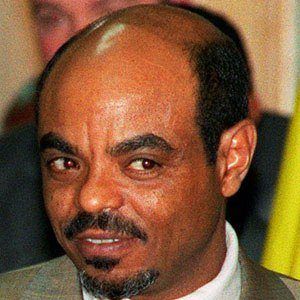 He completed eight years of schooling in just five years. He joined the TPLF in 1975 after he left college. He was president of the transitional government of Ethiopia after the Ethiopian Civil War concluded in 1991.

He adopted the name Meles in honor of a person executed by Mengistu's government.

His father, Zenawi Asres, and his mother, Alemash Guebreluel, were residing in Adwa, Tigray, northern Ethiopia, when he was born. He fathered three children with his wife, rebel fighter Azeb Mesfin. To this day, some believe his death in 2012 was suspicious.

His work in boosting Ethiopia's economy and conducting peace talks was acknowledged by Hillary Rodham Clinton.

Meles Zenawi Is A Member Of