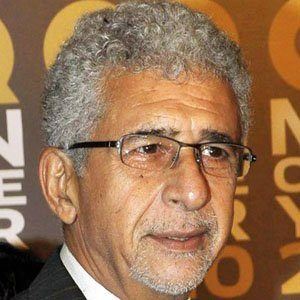 One of the most respected actors of Indian New Wave Cinema and the Bollywood film industry, he won several Filmfare and National Film Awards for his roles in Aakrosh, Chakra, Sparsh, Iqbal, and other critically acclaimed movies of the 1980s, '90s, and early 2000s.

He graduated from Aligarh Muslim University in the early 1970s and also trained at the National School of Drama in Delhi, India.

He appeared in the 2013 Pakistani movie Zinda Bhaag, which was nominated for Best Foreign Language Film at the Academy Awards. Also a stage actor, he co-founded a theater company called Motley Productions and starred in a 1979 production of Waiting for Godot.

He grew up in a Muslim family in Barabanki, Uttar Pradesh, India. His two marriages -- to Manara Sikri and actress Ratna Pathak Shah -- produced a total of three children: actors Heeba, Imaad, and Vivaan Shah.

He appeared with Sean Connery in the 2003 film The League of Extraordinary Gentlemen.

Naseeruddin Shah Is A Member Of