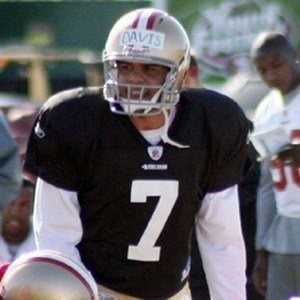 Dual threat quarterback who made his NFL debut in 2009 for the San Francisco 49ers.

He played college football at Ball State, before being selected in the 5th round of the 2009 NFL draft.

After failing to make an NFL roster in 2011, he signed with the Amarillo Venom of the Lone Star Football League in 2012.

He began his career as a backup to Alex Smith.

Nate Davis Is A Member Of