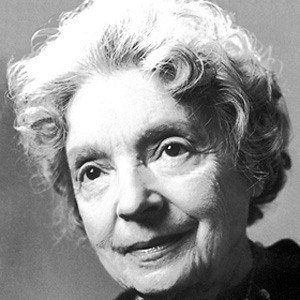 A German-Jewish poet and playwright, she is particularly known for Eli: Ein Mysterienspiel vom Leiden Israels, a 1950 play based on her World War II experiences. Her poetry collections, published between 1947 and 1971, include In den Wohnungen des Todes and Suche nach Lebenden.

She narrowly escaped the Nazis by leaving for Sweden one week before she was supposed to enter a concentration camp.

Her terror over the Nazi rise to power caused her to briefly lose her ability to speak.

She suffered from nervous breakdowns and paranoia and never married. She cared for her mother for many years.

She and fellow German author Thomas Mann were both recipients of the Nobel Prize in Literature.

Nelly Sachs Is A Member Of