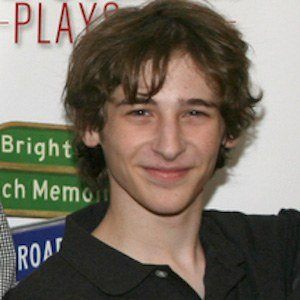 Well known for his Broadway roles in the 2009 production Brighton Beach Memoirs and the 2011 play Arcadia, he would later star in the FOX television event Grease Live!

He got the call that he had landed the lead role in Brighton Beach Memoirs while on his way to rehearse for a part in a production of The Producers at Georgetown Day School. He previously performed on stage in productions of Snow White and the Seven Dwarfs and Alice in Wonderland.

He has appeared in short films and in guest spots on television shows such as Orange is the New Black, Masters of Sex, Gotham and The Good Wife.

He is from Potomac, Washington, and his parent's are Larry, a lawyer, and Leslie, a painter and filmmaker. He has two older brothers.

His part of Eugene Jerome was originated by Matthew Broderick in 1983.

Set It Up
The Week Of
Cruise