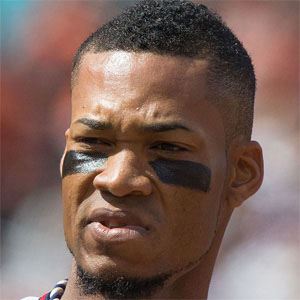 Dominican shortstop who played with the Minnesota Twins from 2012 to 2014. He then spent two seasons with the Pittsburgh Pirates before signing with the Philadelphia Phillies.

He was first signed with the Baltimore Orioles as a non-drafted free agent in June 2004 and played in the Dominican Summer League in 2004 and 2005. He made his MLB debut with the Orioles in 2011.

The website Scout.com caused a stir after they stated that he has trouble hitting a breaking ball and looks "lost at the plate."

He has stated that his favorite Major League Baseball player is Omar Vizquel.

Pedro Florimon Is A Member Of