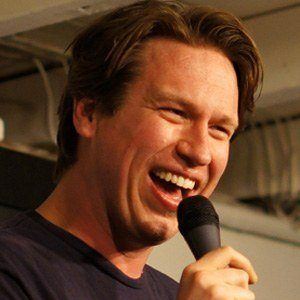 American stand-up comedian, actor, and writer who premiered his own talk show, The Pete Holmes Show, on TBS in 2013. He went on to create and star in the hit HBO series Crashing. He also hosts the You Made It Weird with Pete Holmes podcast.

He is known for his impressions, including most notably his one of Batman, which he has done in many successful online videos.

He married his now ex-wife Becca at 22 and they divorced at 28. He later began dating Valerie Chaney in 2014; they married in November of 2017.

He pitched his show Crashing to Judd Apatow who later became the show's director.

Pete Holmes Is A Member Of