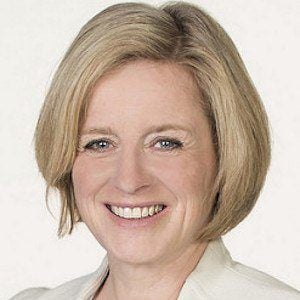 Known for her time as the 17th Premier of Canada's Alberta province as leader of the its New Democratic Party (NDP). She assumed the office on May 24, 2015 after having held her first caucus meeting on May 9.

She earned her B.A. in political science from the University of Alberta. She subsequently earned her law degree from the Osgoode Hall Law School.

She was first elected to Alberta's provincial legislative assembly as a member of the NDP in 2008. She was subsequently elected as an incumbent in 2012 with the highest vote share of any candidate in Alberta that year.

She was raised in Fairview, Alberta by her mother Sandra and father Grant Notley. Her father was the then-leader of Alberta's New Democratic Party.

She has served as Premier of Alberta during Justin Trudeau's tenure as Prime Minister of Canada.

Rachel Notley Is A Member Of