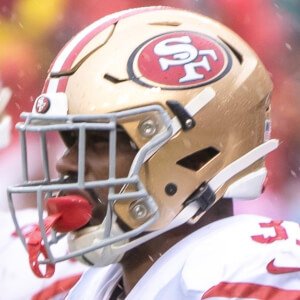 American football running back who became a member of the NFL's San Francisco 49ers in 2016. He set a franchise postseason record by rushing for 220 yards in the 49ers' 37-20 victory over the Green Bay Packers in the 2020 NFC Championship Game.

He was a star football and track & field athlete at New Smyrna Beach High School in Florida.

In his first year at Purdue University, he set a team record by averaging 33.5 yards per return.

He married Devon Beckwith in March 2017. Their son Gunnar was born in June 2018.

He became teammates with quarterback Jimmy Garoppolo after joining the 49ers.

Raheem Mostert Is A Member Of