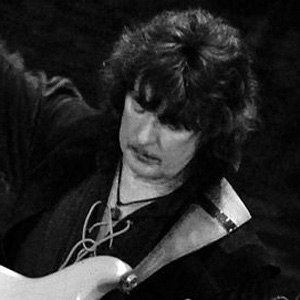 Guitarist for Deep Purple who played on the infamous hit "Smoke on the Water." He was #16 on the 100 Greatest Metal Guitarists of All Time list released by Guitar World in 2004.

He took classical lessons for a year. Big Jim Sullivan taught him how to play guitar.

He was known as one of the first guitarists to fuse classical music with rock 'n' roll.

He is considered one of the best guitarists of all time, often ranked with Jimi Hendrix.

Ritchie Blackmore Is A Member Of