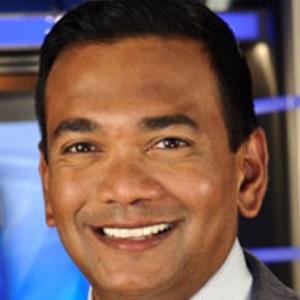 Reporter and news anchor for the local Detroit FOX 2 News who previously won an Emmy Award for Best Continuing Coverage for his work leading up to Hurricane Katrina while he worked in New Orleans, Louisiana. He also received an Associated Press first place award for Breaking Weather Coverage.

His TV career began in Troy, Michigan when he was 14 years old as he created, produced, and hosted a public-affairs talk show on a government access station.

He previously worked as a reporter, anchor and weatherman for the NBC station in Flint, Michigan for 4 years.

He was born and raised in the Midwest of the US by Indian parents.

He appeared on The Phil Donahue Show where he was deemed one of the nation's youngest TV personalities when he was 15 years old.

Roop Raj Is A Member Of