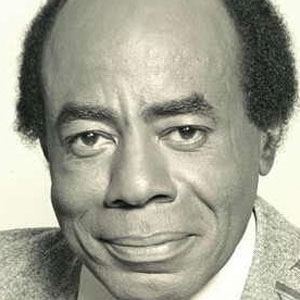 Actor and director who won an Obie Award in 1965 for his performance in the Robert Lowell play The Old Glory, as well as Los Angeles Drama Critics Circle Awards for his roles in The Dream on Monkey Mountain and Joe Turner's Come and Gone.

He was a track star who competed internationally and won the Amateur Athletic Union 1,000-yard national indoor championship in 1949 and the world championship in the 800 yard dash in 1951.

In addition to theater, he appeared in films such as Logan's Run, The Mambo Kings, and 2000's Hamlet. He was inducted into the Black Filmmakers Hall of Fame in 1977.

He was born in Woodbury, New Jersey, the fourth son of Sylvanus S. Browne, a Baptist minister, and Lovie Lee Usher.

His guest appearance on The Cosby Show, starring Bill Cosby, earned him an Emmy Award in 1986.

Roscoe Lee Browne Is A Member Of

Babe
Babe: Pig in the City
Born In 1925
Stage Actors