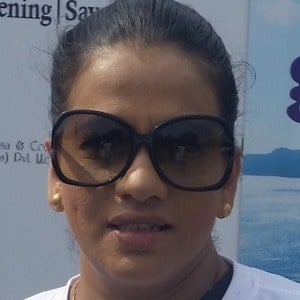 Indian TV actress referred to as Rasika in the Malayalam movie industry. She is best known for her roles in the films Khadgam, Pithamagan, Uyir and Dhanam. She is also a playback singer and Bharatanatym dancer.

She studied at St. John's Besant Nagar where she was elected as the head girl of her school. She made her acting debut in the 1990s.

She was a judge on the Vijay reality TV show Jodi Number One.

She was born in Chennai, India to parents Arvind and Bhanumathy. She married playback singer Krish in 2009. She has a daughter who was born in 2012.

She was one of three judges along with actor Silambarasan and Sundaram in Jodi Number One.

Sangeetha Is A Member Of