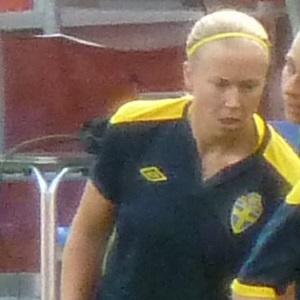 Defender who joined KIF Orebro DFF in 2011 and began her long tenure with the Swedish national team in 2000.

She debuted professionally with Villastadens, before joining Ravasens IK in 1996.

She appeared in 11 matches for the Philadelphia Independence in 2010.

She was born in Kristinehamn, Sweden.

Sara Larsson Is A Member Of