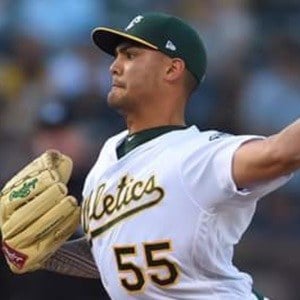 Professional baseball player known for his pitching and association with the Oakland Athletics of the MLB. He is also known for his college baseball career with Indiana State University where he was named the Best Prospect in the Cape Cod Baseball League in 2012.

He attended Indiana State University after high school where he played college baseball for the Indiana State Sycamores as a Division I athlete. He was drafted as the 34th pick by the Kansas City Royals in the 2013 MLB draft. He was then traded to the Oakland Athletics on July 28th, 2015. His professional debut was on April 29, 2015.

On April 21, 2018 he pitched a no-hitter against the Boston Red Sox. He became known as the first Oakland Athletics pitcher to throw a no-hitter since Dallas Braden did in 2010. As a result, he was named the American League's Player of the Week.

He was born and raised in Valparaiso, Indiana. He has an older half-brother from his father's first marriage.

He was traded along with Aaron Brooks to the Oakland Athletics in exchange for Ben Zobrist.

Sean Manaea Is A Member Of