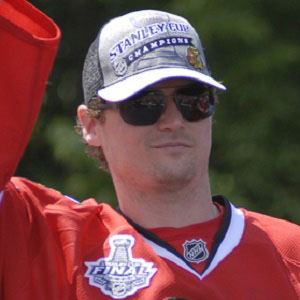 Canadian defenceman who won the Stanley Cup as a member of the Chicago Blackhawks in 2013. He previously spent four seasons with the Anaheim Ducks and was a First Team All-Star in the American Hockey League.

He was born in Lanigan, Saskatchewan and began playing for the Humboldt Broncos of the Saskatchewan Junior Hockey League in 1999.

In 2006-07, he received the Eddie Shore Award as the American Hockey League's best defenceman, having led all AHL defenceman in points that season.

His older brother is fellow professional hockey player Wade Brookbank. His cousin Geoff Sanderson has also played in the NHL.

He won a Stanley Cup with the help of Conn Smythe Trophy-winning centre Jonathan Toews.

Sheldon Brookbank Is A Member Of