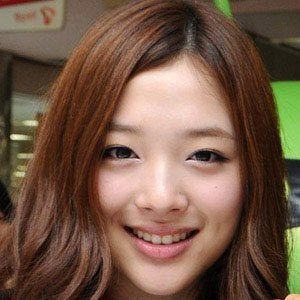 Known for her roles in such South Korean television series and films as To the Beautiful You and Fashion King, she also had careers in modeling and singing. She was a member of the band F(x).

She began her acting career at the age of eleven, appearing as a young version of Princess Seonhwa in the television series Ballad of Seo Dong.

Because of her youthful features and tall stature, she earned the nickname of "Giant Baby" among her fans.

Born Choi Jin-ri, she grew up with three brothers in the city of Busan, South Korea. She dated rapper Choiza in 2013.

She and Victoria Song appeared together in a 2012 Super Junior music video.

Sulli Is A Member Of