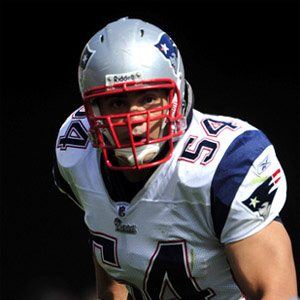 Linebacker who played his entire 13 year career with the New England Patriots winning 3 Super Bowl titles and being selected to the 2004 Pro Bowl. He became an ESPN analyst after retirement.

He was a standout basketball player, football player, and shot putter at Roseville High School in California.

He won the Ed Block Courage Award twice, he also returned to the NFL after suffering a mild stroke.

He married Heidi Bomberger in June of 1997 after having met as athletes at the University of Arizona.

He helped anchor the defense while Tom Brady ran the offense for the dominant New England Patriots in the early 2000s.

Tedy Bruschi Is A Member Of