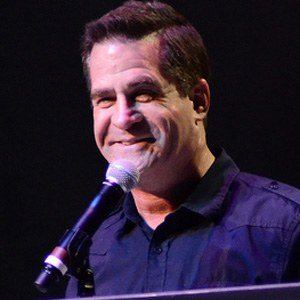 Philadelphia-born comedian who appeared on such television programs as Last Comic Standing and The Dennis Miller Show. He is known for his comedy albums Vintage Todd Glass and Other Crap, Thin Pig, and 2013's Todd Glass Talks About Stuff.

He began his career by appearing on several late 1980s and early 1990s stand-up shows on A & E and Comedy Central.

He suffered a non-fatal heart attack in 2010 at a comedy club in Los Angeles, and went on the Bonnie Hunt show when he'd recovered to talk about it.

He came out of the closet in a 2012 podcast, with the goal of preventing the suicides of gay and lesbian teens.

He frequently appeared on Jimmy Kimmel Live and other late-night talk shows.

Todd Glass Is A Member Of