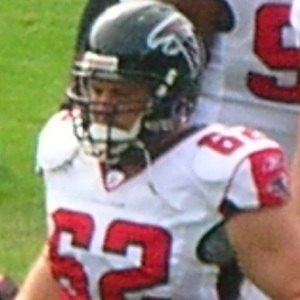 Retired NFL center who started 195 games at center for the Atlanta Falcons over the course of his 13-year career. After retiring, Falcons' owner Arthur Blank said that he would eventually join the team's ring of honor.

He played college football at LSU before being selected in the seventh round of the 1999 NFL Draft. He missed his entire rookie season with a torn ACL.

Although he had a successful NFL and college career as a center, he played defensive line and tight end in high school. He would start the game at center to provide game film to send to prospective colleges, then return to his natural positions.

He has four children with wife Heidi. He played high school football with his brothers and was coached by his dad.

He was the center for Michael Vick during the latter's time in Atlanta and helped pave the way for Vick to set a since-broken quarterback playoff rushing record in 2004.

Todd McClure Is A Member Of